PHOENIX focuses on growth and digitalisation 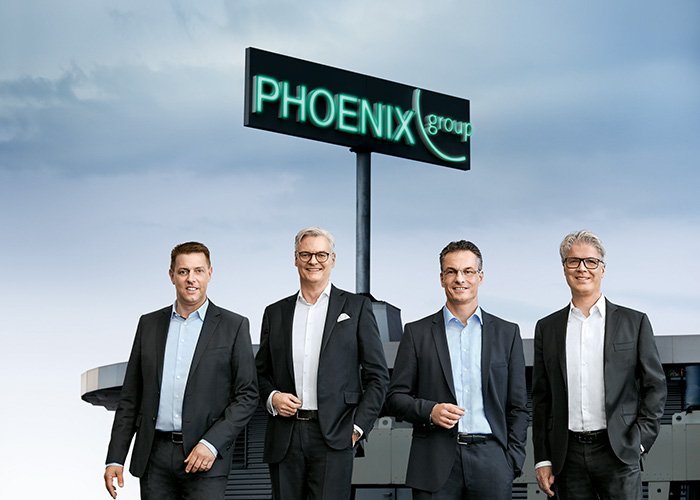 Mannheim, 23 May 2019 – In the twenty-fifth year after it was founded, the PHOENIX group achieved stronger growth than the international pharmaceutical markets for the ninth time in a row – despite adverse conditions. In fiscal year 2018/19 (31/01/19), the total operating performance of the healthcare provider with an active presence in 27 European countries rose to more than €33 billion. This key figure, comprising revenue and handled volume, is particularly relevant for pharmaceutical wholesale. At around 5 per cent above the previous year’s figure, it is at the highest level in the company’s history. Revenue grew by 3.6 per cent in comparison with the previous year to around €26 billion. The revenue increased in nearly all markets.
Earnings before interest, taxes, depreciation, and amortisation (EBITDA) rose from €468.0 million to €471.1 million. Although the company improved its operating result compared with the previous year despite numerous one-off effects relating to optimisation programmes, the profit for the period fell to €-112.0 million. This was due to impairment losses on goodwill of around €280 million. In the United Kingdom, the deductions in pharmacy remuneration by legislators resulted in a reduction in future earnings forecasts. A comprehensive optimisation programme, with the aim of improving the earnings situation in the UK in the medium term, is under way. In the Balkan countries, changes in the market environment led to a downturn in medium-term earnings forecasts.

PHOENIX group strengthens equity
At the same time, equity increased due to an account of a capital contribution of around €335 million to over €2.8 billion. The equity ratio developed better than forecast, rising from 31.7 per cent to 33.5 per cent.

Expansion of pharmacy portfolio
The 2018/19 consolidated financial statements included the companies in Romania, with around 2,200 employees, for the first time. “With the acquisition of the pharmaceutical wholesaler Farmexim and the nationwide pharmacy chain Help Net, the PHOENIX group has tapped into a new and attractive market in Romania. These companies strengthen our position as an integrated healthcare provider,” said Oliver Windholz, Chief Executive Officer of PHOENIX Pharma SE. In Serbia, more than 600 employees joined the company following the takeover of a pharmacy chain. The total number of employees rose from 34,000 to 37,000.

“With more than 2,500 pharmacies, we are leading in continental Europe and can offer our customers throughout the region attractive services and professional advice,” stated Windholz. The total number of pharmacies increased by more than 400 compared with the previous year. They are a central component of the PHOENIX strategy. “We base our approach on the three aspects of ‘depth, breadth, and digitalisation’, which means that we are aiming to position ourselves more deeply, with more pharmacies, and more broadly, with more services, in 27 countries while, at the same time, becoming more digital,” explained Windholz. In doing so, the company intends to get even closer to its end customers.

Europe-wide investments
In fiscal year 2018/19, the PHOENIX group invested around €176 million in the expansion and modernisation of its pharmacy network and distribution centres, in automation technology, and in logistics services for the pharmaceutical industry. With the ONE project, the company is building the group’s largest distribution and logistics centre in the Danish town of Køge at a cost of more than €70 million. The modern highrack warehouse will offer space for around 60,000 pallets.

PHOENIX provides digital answers
In the summer of 2019, the new digital unit PXG Health Tech, which is currently being established, will be launched. The aim is to offer customers digital solutions across Europe. PHOENIX also cooperates with start-ups. In the United Kingdom, a pilot project is launched in the area of telemedicine. Online consultations allow patients to obtain advice from doctors – e.g. on travel vaccinations, which they are then given at Rowlands Pharmacies. In Germany, PHOENIX launched the app “deine Apotheke” (“your pharmacy”) to provide all German pharmacies with a package of digital services designed to support sales. The app consists of two components, allowing end customers to scan in prescriptions quickly and easily as well as pre-order drugs or health products directly from their pharmacy. Through the cooperation with PAYBACK, PHOENIX is also opening up exclusive access to Germany’s most popular loyalty programme.

Positive outlook for fiscal year 2019/20
“We are in a good position to continue growing successfully in the future and to expand our market position in Europe,” underlined CEO Oliver Windholz at the presentation of the annual results. “Our forecast for fiscal year 2019/20 once again anticipates growth above the level of the European pharmaceutical markets. We are expecting an increase in our revenue and earnings thanks to organic and acquisition-related growth as well as improved efficiency,” concluded Windholz.

back to all news